Media should not allow such statements by Trump and other politicians to stand without comment. In doing so, they propagate a battle cry with a historical tradition. By Dr. Viola Huang

Dr. Viola Huang (Ph. D., Columbia University Teachers College) is a historian and Americanist at the University of Passau. In her research, she occupies herself with the civil rights and black power movements and the way such movements are presented in the media, the public sphere and historical culture. She is also a member of the interdisciplinary project SKILL.de, which prepares teachers-to-be to shape digital change with school pupils and take a critical look at information found on the Net. In her blog (in German), she analyses current debates about racial violence and puts them into historical context. This piece is an excerpt from her blog.

Since the beginning of the current protests against racist police violence in the USA, US President Donald Trump and other politicians and police representatives have been claiming that the protests are led by 'outside agitators'. Sometimes they accuse left-wing radicals, sometimes protest tourists who have travelled to the region to take part.

The purpose of this is clear: the Trump government aims to deny the protests their legitimation and defame the demonstrators as left-wing radicals. The term 'outside agitators' has a long tradition – as a battle cry against anti-racist movements. It is important to put this allegation into its historical context.

Freedom Riders: anything but 'outsiders'

In the spring of 1961, for example, the Freedom Riders set out by bus from Washington D.C. to New Orleans. Their aim was to enforce the decision of the Supreme Court prohibiting racial segregation in public transport. The Freedom Riders had committed themselves to non-violent resistance. Today, they are acclaimed as brave visionaries.

The gist of the reporting in the 1960s was quite different: it is true that the press reports commented on the abolition of racial segregation in a predominantly positive way, but they depicted the Freedom Riders as 'outside agitators' whose aim was to cause turmoil, violence and chaos. The method of protest was described as too radical, as dangerous or as stupid and naive. That reporting, and the delegitimation of the form of protest associated with it, made an impact: whilst according to a Gallup poll in 1961 66 per cent of the Americans surveyed approved of the Supreme Court decision prohibiting segregation in public transport services, only 24 per cent supported the Freedom Riders, who had committed themselves to the enforcement of that very decision.

Dr. Viola Huang, Research assistant at the Professorship of History Education at the University of Passau

The assertion that the Freedom Riders came from the North and basically had nothing to do with the situation in the South was untenable. The historian Raymond Arsenault, for example, in his comprehensive history of the Freedom Riders, shows that some 40 per cent of the activists actually came from among the black population of the southern states and were thus anything but 'outsiders'.

Another man who came from the southern states was the black civil rights campaigner Reverend Dr. Martin Luther King Jr.  From today's point of view, it seems nothing short of absurd that he too had to hear himself labelled an 'outside agitator'.

How Martin Luther King was disparaged

In 1965 in Selma, Alabama, thousands of blacks had gathered to set out on one of the famous Selma-to-Montgomery marches. This was one of the culminations of the US civil rights movement. The reason for the first march was the death of Jimmy Lee Jackson, who had been shot dead by security forces at a civil rights demonstration. But the sheriff of Dallas County in Alabama started rumours suggesting other kinds of motivation: he claimed that the protest was instigated by 'outside agitators' like Martin Luther King. He said that the black people of his town had no wish to take part in the protests, as they were content with their situation. Instead, he claimed, they were being forced to take part by King. He said it was King's tactics to spread unrest and chaos among the population.

Then as now, the narrative of 'outside agitators' served not only the purpose of denying the protest its legitimation. It was also intended to sow doubts as to whether there was any reason to take to the streets at all. When all is said and done, Trump and those locally responsible are perpetuating the cynical argument that supporters of racial segregation propounded long ago at the time of the Jim Crow laws, according to which blacks were happy being second-class citizens and had no reason to protest.

Closely connected with that is the strategy of not merely marginalising the 'outside agitators' as outsiders, but defaming them as left-wing radicals. That is not new either; it's just that the terms used change. For example, in the 1960s both white and Afro-American representatives of the US civil rights movement were disparaged as Communists. The sheriff referred to above also claimed that a quarter of the demonstrators were Communists and half of them at least pro-Communist. 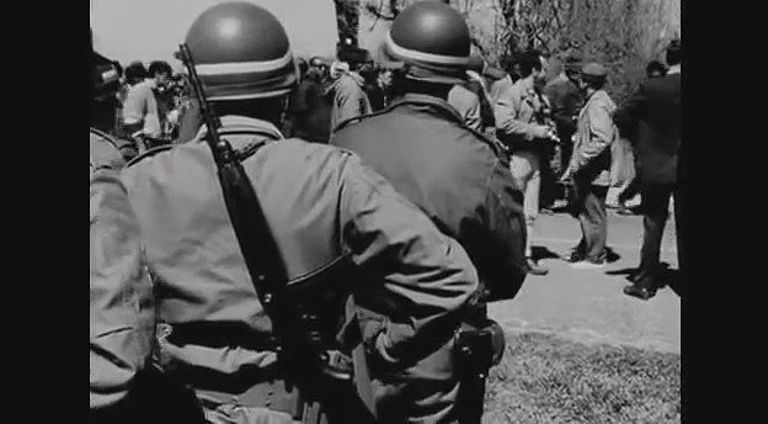 In the South of the USA, a white supremacy organisation distributed more than 200 posters connecting Dr. Martin Luther King Jr. with Communism.

Today, it is terms like 'left-wing radicals', 'anarchists' and 'anti-Fascist terrorists' that are brought to bear with the aim of dividing the movement and discrediting it in the public eye. There's no need for posters any more now. Tweets and other posts in social networks suffice, and in some cases they are quoted quite uncritically in various different media reports.

These misrepresentations still have the same function: to delegitimate the protest in the eyes of the general public, while mobilising right-wing and radical right-wing forces against the demonstrations.

These misrepresentations still have the same function: to delegitimate the protest in the eyes of the general public, while mobilising right-wing and radical right-wing forces against the demonstrations. And they also aim to divide the social movement itself by sowing doubt about the motives of the various protagonists: the objective is to make blacks believe that their cause has been adopted by white radicals and that the protest is no longer theirs, and at the same time to deter the moderate white population from taking part in the demonstrations.

Allegations that are utterly without foundation

Be that as it may, these allegations are opposed by facts. Research carried out by journalists on location, for example by the local NBC partner KARE 11, revealed that the great majority of demonstrators arrested in Minneapolis and St. Paul were domiciled in the State of Minnesota, whilst only a few of them came from neighbouring states such as Wisconsin. Neither did an internal FBI report find any indications that anti-Fascists were substantially involved in the protests in Washington, D.C. There is no doubt that white (and non-white) left-wing and radical activists are currently also among those involved in the protests. But claims that they, or alleged outsiders, are the driving force behind them, have no empirical foundation whatsoever.

Nevertheless, many media reports contain sentences suchas this: "Meanwhile, discussions continue in the USA as to why the protests have escalated so badly – and who could be behind them. Trump has blamed anti-Fascists and left-wing radicals." This type of reporting uncritically spreads speculation to the effect that there must be somebody behind the protests – as if it were unimaginable that the killing of yet another Afro-American by police could, in itself, furnish sufficient grounds for them. Moreover, Trump's unfounded statements are circulated without criticism.

What can help in reporting

Media that report in this way are not neutral, but help to spread deliberate disinformation and doubts about the legitimate cause of the protests. Journalists are under more pressure today than ever before – on account of the hectic nature of their day-to-day business and the fast pace of the news. Yet however much understanding one has for their having to do their work under that pressure of time, this is an issue in which it would be so important to re-read those supposedly neutral, harmless paragraphs once more with a critical eye and perhaps add a sentence that classifies what they say. A first step here could be to exchange views now and then with people from outside the white dominance culture so as to be able to recognise the power of such narratives.

Scientists, along with students, are developing new concepts for the use of digital media in education.

In the pandemic, younger people are making sacrifices out of solidarity with the older generation. Why doesn't that work the other way round in the climate crisis? Student Janina Körber asked researchers at the University of Passau.

Watching explanatory videos at home and then intensifying understanding at school? In her dissertation, Dr. Marlene Wagner has been examining the effectiveness of the "flipped classroom" concept. Her research has attracted a great deal of attention.