The day began with news full of hope from Georgia, and ended with an unprecedented assault on democracy: the events of 6 January stand for the conflict between two essentially American forces.

At first, 6 January 2021 was supposed to go down in history with hopeful news from Georgia, of the kind that had not really been expected. The day ended with an unprecedented assault on American democracy which all attentive observers should have been able to foresee. The events of last Wednesday stand for the conflict between democracy and authoritarianism, between involvement and racism, which is inscribed very deeply in American society. As a historian, I don't just see parallels to the phase of reconstruction following the end of the American Civil War in the 19th century. The tensions that were discharged on 6 January 2021 can be traced all the way back to those times.

carries on research into social movements in the USA

What can we learn from breaks and continuities in US history and now apply to the present?

What can we learn from breaks and continuities in US history and now apply to the present?

The historian Dr. Viola Huang (Ph. D., Columbia University Teachers College) is an associate at the Professorship of History Didactics and in the interdisciplinary project SKILL.de. She runs a blog in which she picks up on current debates about racist violence and puts them into a historical perspective.

But first ... back to the present.

Georgia: victory for the Democrats – and democracy

Wednesday began with the news that the Democrats had prevailed by a slender majority in the runoff for the two Senate seats of the State of Georgia. That result is significant, not only because the Democratic Party has now gained a majority in the upper house at Congress. Both symbolically and from an anti-racist point of view, this election victory is historic in nature: Jon Ossoff has now become Georgia's first Jewish senator, and Raphael Warnock Georgia's first Afro-American senator – of all places, in the state of the Republican-dominated South in which the racist and terrorist Ku Klux Klan was revived in 1915. Warnock, by the way, is only the fourth black senator to come from the Southern States at all – in spite of the fact that the first two black senators represented the State of Mississippi in America's upper house as far back as the 1870s. 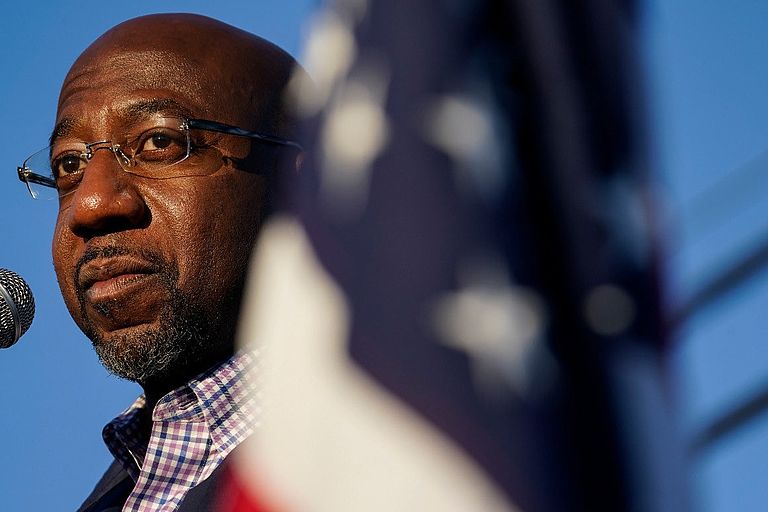 JoyAnnReid@JoyAnnReid
There is poetry in history. @ReverendWarnock will be just the 11th Black U.S. Senator, Georgia’s first, and the 4th from the South. The first two served during Reconstruction from the then-liberal, anti-slavery Republican Party. The third emerged from the anti-Obama tea party.
8:36 AM - Jan 6, 2021
1.632
9.913

However, it is not the demographic make-up of the South that is responsible for its having taken almost 150 years for a black (Democrat) senator to represent one of the Southern States. After all, those states are where some 58 per cent of the black population live. On the contrary, the reasons why those states are firmly in the hands of conservative whites are white supremacy and the effects of active endeavours to deprive the black population of power systematically, for example in the form of voter suppression. If, in the phase of reconstruction, in other words directly after the abolition of slavery in 1865, blacks finally won themselves political rights and societal involvement and were, in many places, elected to local, regional or even national parliaments, the white establishment of the Southern States suppressed these trends massively and with increasing success: local racial segregation laws pushed blacks out of public life, degrading them to second-class citizens and depriving them of the right to vote that they had only recently struggled to gain. At the beginning of the 20th century, moreover, racist violence reached a new climax in the form of lynch law.

So the result of the election in Georgia can by all means be understood as a kind of "third reconstruction" (following the "second reconstruction" in the civil rights movement of the 1960s): in it, the success brought about through the untiring commitment of non-white and progressive electoral groups over the years and black activists, such as Stacey Abrams, can be seen. That Wednesday in January 2021 began with a promise to break up the supremacy of a reactionary-conservative political minority in the Southern States and transform the USA as a whole step by step into an egalitarian, non-racist democracy.

Be that as it may, the fact that both now and in history, trends toward the greater involvement of marginalised groups in the USA have regularly met with massive and also violent resistance manifested itself convincingly during the subsequent events of that historic Wednesday in the capital.

Washington, D.C.: assault on democracy and defence of white supremacy

For political observers, unlike the result of the Georgia election, the scenes that were to unfold that day in Washington, D.C. had already been in the offing for a long time. Verbally, judicially and politically, US president Donald Trump – still in office – and his entourage had tried everything to declare the election of Joe Biden void, sow doubts and retain power. Even if the security services now claim not to have had any information about a threat scenario, experts had for weeks been documenting – and sounding the alarm in respect of – a motley coalition of radical Trump fans, right-wing extremists and conspiracy theorists who were openly planning and announcing an attack on the Capitol on the Internet, and using warlike rhetoric in doing so.

Yet this attack on the parliament of the USA must be understood as more than just a protest that got out of hand or a riot: it was nothing less than an assault on the very structures of the democracy of the USA. Its aim was to prevent a free, democratic election from being certified, and thus – de facto – to execute a coup against a newly elected government. Video footage of masked militiamen and pipe bombs found near the Capitol indicate that some paramilitary cells had definitely planned to go further than that. Not least, the plot by members of right-wing militia to kidnap the governess of the State of Michigan and overthrow its government, thwarted by the FBI in October, underlines the potential of the extreme right for violence.

Even though the events of 6 January are historically unique from many points of view, they are not without parallel. Repeatedly, a violent backlash against the (potential) loss of white supremacy has been part of American history, as on 10 November 1898 in Wilmington, North Carolina, for example. The Southern State town of Wilmington was relatively well integrated. Its black population worked in respected professions, as policemen, firemen and judges, and the local government was made up of both white and black councillors. But the resentment of the whites grew as black involvement increased. Hundreds of white citizens drew up a “White Declaration of Independence”, in which they declared that they were never again going to allow themselves to be ruled by black people. That uprising finally came to a head in a coup by white supremacists and a massacre of members of the black population.

Role of the white political establishment

Then as now, the violence was directed against institutions, journalists and members of parliament, who speak out in favour of the integrated representation of all sections of the population and thus – in the eyes of the extreme right – undermine the unrestricted power of the white establishment. As in Wilmington in 1898, the white political establishment also plays a central role in Washington in 2021: if, back then, businesspeople and veterans were the driving force behind the lynch mob, and if some of the rebels went on to pursue political careers as senators and congressmen, reports about the events in January 2021 have indicated that military and police veterans and business executives were among those who attacked the Capitol. Worse still: it was the outgoing president himself and his aides and attorneys who explicitly and repeatedly issued the call to join in a violent assault on the Capitol; and even after this bellicose attack on the Capitol building, which failed in the end, a total of 147 Republican congressmen and women voted against the official certification of the result of the presidential election.

A new low in the conflict between essentially American forces

That is another reason why 6 January 2021 stands for the fragility of government institutions and shows that large sections of the Republican Party are prepared to accept authoritarianism as a strategy for retaining their power. It is conceivable that a different situation as regards majorities in the House of Representatives might have enabled Trump's recent attempt to seize power to be more successful.

That Wednesday in January 2021 thus constitutes a new low in the conflict between two essentially American forces: the progressive aspiration toward an inclusive democracy and the involvement of all sections of the population on the one hand, and the preservation of an exclusive, suppressive, white supremacy that is inclined to violence on the other. In the election in November 2020, the people had already spoken out against a reactionary, authoritarian and chauvinistic agenda on the part of Trump and the Republican Party: 81 million US citizens voted for Joe Biden – the best result in the history of the US. Yet Donald Trump also got 74 million votes. According to a representative survey, almost half the Republican electorate approve of the attack on the Capitol building.

In the 19th century, the phase of reconstruction was brought to an end by massive racist oppression. Today, as a US historian writes on Twitter, the USA has once again come to such a historical crossroads:

Dr_ChadWilliams@Dr_ChadWilliams
Reconstruction came to an end when the government and most of white America chose sympathy with traitors over punishment, the security of a white republic over the possibility of a multi-racial democracy, reconciliation over justice. We are at another crossroads.
2:30 PM - Jan 7, 2021
3.876
12.729

January 6 2021 has certainly shown one thing: the battle for the future of the USA – whether it lies in a multi-ethnic democracy with equal and just involvement for all, or in reactionary white supremacy – is anything but decided with the official end of the Trump era.

The tweets quoted here are displayed to you in a way that is compliant with the data protection requirements.

Part 5: Dr. Natalia Poluhin-Ivanusa, a scholar of Eastern European history from Ukraine, tells us about the Jewish population in her home country.

Part 4: Communication scholar Professor Ralf Hohlfeld about how to handle fake news using the example of a false report that had been doing the rounds among students.