Open talks on a difficult topic: at the University of Passau, speakers from science, politics and the media analysed together with the audience the way in which anonymous accusations and tip-offs are handled.

Anonymous accusations can destroy existences in science. Yet without anonymous tip-offs, many a case of scientific malpractice would remain undiscovered. The aims of the convention 'Sender Unknown. Methods Used in Science for Dealing with Anonymous Accusations', held on 20 and 21 February at the University of Passau, were to conduct an open discussion on this difficult subject, identifying the problems by giving them some structure and exchanging opinions on them.

Professor Carola Jungwirth, President of the University of Passau and Vice-President of the German Rectors' Conference (HRK), summarised as follows: "We've seen that events in the scientific institutions can be perceived in many different ways." Her conclusion: "The convention has shown us that we now need to develop guidelines and implement them right across Germany. What should the procedure be – step by step – for dealing with a case of accusations with no sender? How is the question of guilt to be investigated?" One female participant described the convention as a 'sign of self-confidence on the part of science regarding its ability to review existing shortcomings and redress them'.

Eminent speakers from science, politics and the media mapped out the wide range of anonymous accusations – from attacks in the form of cyber-mobbing to justified tip-offs given under the shelter of anonymity. The convention was divided into three major areas: legal framework conditions, management behaviour, and the role of the public.

The honest people among them – and most of them are honest – deserve protection, especially those who, in many cases, are in fact putting their very existence on the line as up-and-coming young scientists.

Professor Stephan Rixen, spokesman of the 'Ombudsman of Science' committee at the German Research Foundation (DFG) on anonymous tip-offs

Professor Bernhard Kempen, President of the German Association of University Professors and Lecturers (DHV), said: "At the DHV, we're concerned to see that cases of scientific malpractice and also those of unjustified anonymous accusations are increasing in number." Professor Stephan Rixen, spokesman of the 'Ombudsman of Science' committee at the German Research Foundation (DFG), underpinned this statement with some figures. In the past year, he said, there had been 155 reported cases – i.e. more than in the preceding years. However, only 15 of those were attributable to anonymous tip-offs. Professor Rixen spoke in favour of being quite clear about the need to protect these anonymous informants: "The honest people among them – and most of them are honest – deserve protection, especially those who, in many cases, are in fact putting their very existence on the line as up-and-coming young scientists."

In Cornelia van Scherpenberg, the audience also contained a representative of the network of doctoral researchers called 'N2 Network of Networks'. She had written a position paper on the subject of power abuse:

cornelia_v_s@cornelia_v_s
Great insights from Prof. Rixen from Ombudsmann f. d. Wissenschaft @dfg_public who says that (1) there can only be good science within a good working atmosphere (2) only 15/155 accusations in 2019 were anonymous and (3) press coverage is a sign of failing internal structures!
4:52 PM - Feb 20, 2020
1
5

Professor Kempen of the DHV said it was important to remember the basic principles of the rule of law. These included the presumption of innocence, the right of those concerned to be heard, and quick and efficient proceedings. He recommended circumspection in dealing with anonymous informants. He said it needed to be made clear to them that there was a stage in the proceedings at which their anonymity could no longer be guaranteed. Professor Max-Emanuel Geis, director of the research unit for matters of law as they relate to science and institutions of higher education at the Friedrich-Alexander University (FAU) in Erlangen-Nürnberg, and Professor Klaus Herrmann, an attorney specialising in administrative law, went into the legal aspects even more deeply.

The sociologist Professor Kenneth Westhues, from the University of Waterloo, was connected with the meeting by Skype. He showed where the limitations of institutional proceedings were: as soon as there were prosecutional interests at stake, he said, it ceased to be a case for the institutions of higher education and became a matter for the investigating authorities.

The topic of the behaviour of management personnel was the reason why Thomas Sattelberger, a member of the FDP and the Bundestag and a former member of the executive board of Telekom, came to Passau. He identified the issue of management and work culture in science as a more complex problem. He said he considered those who had to cope with various kinds of discrimination to be particularly at risk. He summarised his theory as follows: 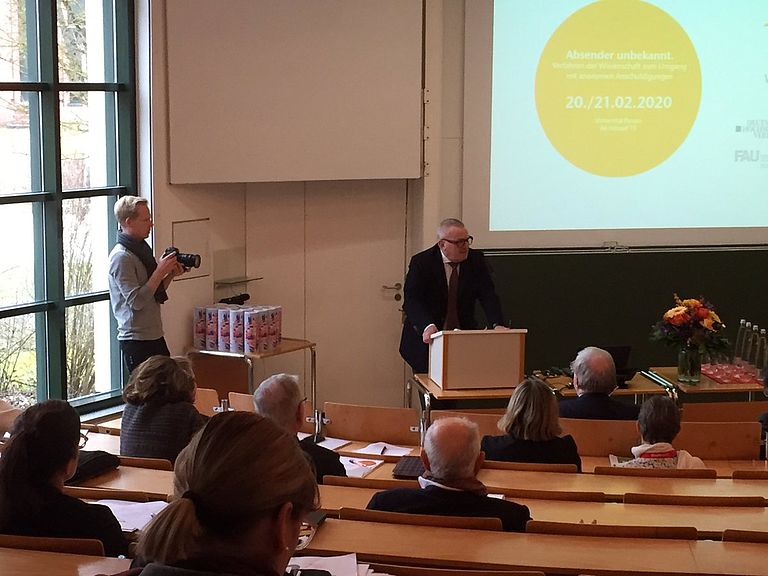 In her talk, Professor Isabell Welpe, an organisational researcher at the Technical University of Munich (TUM), dealt with gender bias, in other words distortional effects caused by gender-specific stereotypes and prejudices. She said these were well documented in research and also provided the answer to the following question: 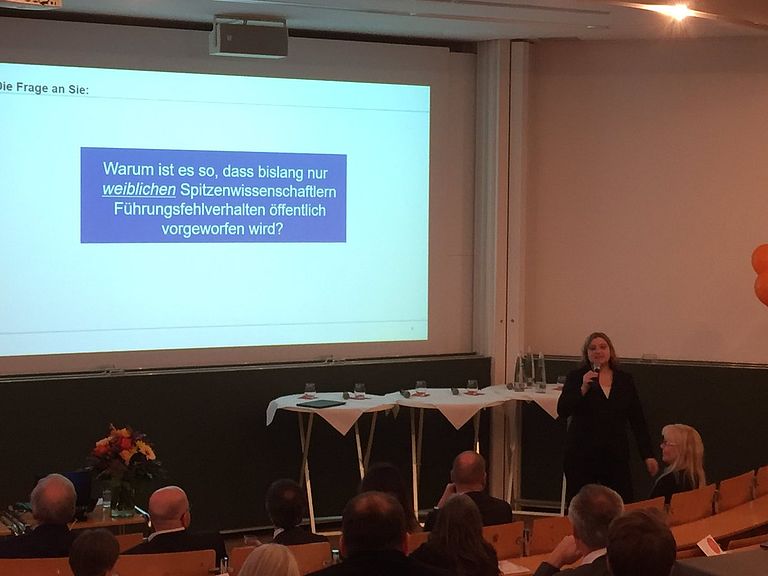 A very pithy lecture with awkward questions (and answers) from Professor @IsabellWelpe at the convention #SenderUnknown @UniPassau (Spoiler: it's about #UnconsciousBias)

So what helps in combatting that? Professor Welpe had an answer to that question too:

Does #Diversity training help against #UnconsciousBias? No, says @IsabellWelpe. But she has a clear answer as to what does: upholding the principles of the rule of law.

The media and the public

Another guest at the University of Passau was Sonja Volkmann-Schluck, spokeswoman for public relations at the German Press Council:

Back in a lecture theatre after a gap of many years and looking forward to the convention #SenderUnknown at the @UniPassau where I'm reporting on the way the @German Press Council handles reports of suspicion following anonymous tip-offs in science.

In her talk, she stressed how important anonymous tip-offs are in journalism: "Just think of MeToo or the allegations of abuse in the Catholic Church. Without anonymous informants these scandals would never have been uncovered." Having said that, she also showed where the Press Code sets limits for journalists – for example when it comes to the question of whether the identity of the man or woman suspected should be disclosed in reporting.

Professor Hannah Schmid-Petri, holder of the Chair of Scientific Communication at the University of Passau, put forward the hypothesis that there had not actually been an increase in the number of cases of anonymous accusation, but that they were tending to be brought to the attention of the public more. In her talk, she showed why scientific institutions found things so difficult when it came to reporting such cases. Unlike commercial enterprises, she said, institutions of higher education, and individual scientists too, hardly had any experience with crisis communication.

My example has shown that it's good to go public. And it's also shown that people have had the courage to express their opinion as well and say: 'That is completely unacceptable'.

Professor Susanne Schroeter, director of the research centre Global Islam at the University of Frankfurt am Main, recommended going public early in cases of cyber-mobbing. She had organised a conference on the subject of 'The Islamic hijab – Symbol of Dignity or Suppression' and soon found herself exposed to an on-line campaign calling for her dismissal. She reported this to the university management – President Birgitta Wolff got behind her right away – , published the accusations on her Facebook page and informed the Frankfurter Allgemeine Zeitung. "My example has shown that it's good to go public. And it's also shown that people have had the courage to express their opinion as well and say: 'That is completely unacceptable'."

Dr. Hannah Bethke, a feature correspondent for Berlin for the Frankfurter Allgemeine Zeitung, delivered her view of science as a media representative and ended with an ardent appeal that science should concentrate more on its core: "I'd like to see a sophisticated, content-related debate about the scientific object." And she went on to say: "Science has every reason to be self-confident."

This scientific convention was a cooperation between the University of Passau, the Bavarian State Institute of Higher Education Research and Planning (IHF), the German Research Foundation (DFG), the German Association of University Professors and Lecturers (DHV), the research unit for legal matters as they relate to science and institutions of higher education at the Friedrich-Alexander University (FAU) in Erlangen-Nürnberg, and the German Rectors' Conference (HRK).

A publication is planned covering the results of the convention: the plan is to publish the speakers' presentations in a special issue containing 'contributions to higher education research' by the Bavarian State Institute of Higher Education Research and Planning (IHF).