It all began with a Franco-German Study Partnership: At the University of Passau, digital actors from industry, academia, and government are working together to advance digital systems research. By Nicola Jacobi

If these were normal times, there would be a linguistic free-for-all reverberating through the corridors and rooms at the chair of Prof. Dr. Harald Kosch. French, English and German, with some Bavarian in between. The holder of the Chair of Distributed Information Systems, also vice-president of the University of Passau, is known for the cross-border way he champions scientific dialogue.

Meanwhile, Kosch and his team have instutionalised that exchance on several levels: in various networks and collaborations with academic and industrial partners from France, Italy, Tunisia and Romania. Within this framework, events, workshops and conferences take place on a regular basis.

One event in particular arouses great interest among external stakeholders: the annual German-French "Artificial Intelligence for Industry" summer school, in which well-known partners from universities and business participate. The University of Passau organizes it together with the Ecole Normale Supérieure Paris Saclay, one of the highest academic institutions in France. The meeting not only promotes the exchange between researchers, but also the dialogue between researchers and stakeholders from industry as well as from public authorities. The summer school focuses on research around the topics of artificial intelligence engineering, machine learning and sustainability.

Because of the corona pandemic, the organizers from Passau and Paris decided to find an innovative digital format for the 2020 edition of the summer school, which was originally planned in France. "Innovation, European collaboration and our partnership are stronger than the virus", is the message of a tweet: 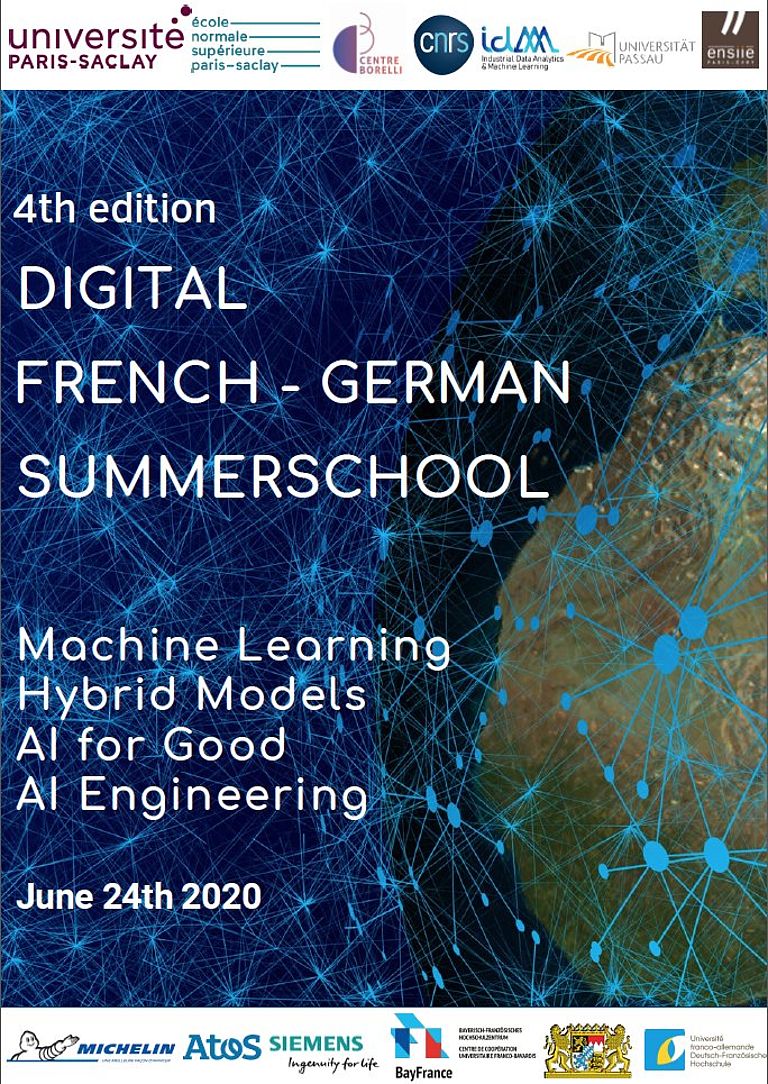 irixys@irixys
„Innovation, European cooperation & our partnership are stronger than a virus“ say the organisers of the annual French-German Summerschool on A.I for industry (@UniPassau, @ENS_ParisSaclay). The event supposed to take place in France is replaced into an innovative digital event.
11:29 AM - May 15, 2020
1
4

How can intelligent systems source information from across various media?

How can intelligent systems source information from across various media?

Professor Harald Kosch has held the Chair of Distributed Information Systems at the Faculty of Computer Science and Mathematics since 2006. He is the German director of DFH/UFA Doctoral College, which brings together INSA de Lyon and the University of Passau. The main purpose of this exchange is to facilitate cooperation projects in intelligent digital systems.

Thanks to the support of the Siemens Artificial Intelligence Lab, the meeting now takes place digitally on June 24th, 2020 (here is where you can sign up). A live session is combined with a website on which a large number of videos are available from academic speakers, but also from actors from business and public institutions.

This cross-border exchange has also institutionalised in the network IRIXYS, the International Research and Innovation Center in Intelligent Digital Systems. This digital research platform was founded in 2016 by the University of Passau, the Institut National des Sciences Appliquées (INSA) in Lyon and the Università degli Studi di Milano with the aim of bringing together tomorrow's cleverest minds from politics, science and economics. The focus is on research into all aspects of digitalisation, big data and artificial intelligence.

IRIXYS organizes twice-yearly workshops designed specifically for PhD students where they can exchange views with other researchers as well as individuals from the world of business. Another highlight of 2019: IRIXYS had a stand at the VivaTech technology conference in Paris.

Axelle Cheney, Coordinator at the Chair of Distributed Information Systems

"There was a need for concrete exchanges on digital innovations among business, research, and politics. IRIXYS is very innovative as it manages to bring people together—from industry, from academia, and from the public authorities—and this, at a transnational level", explains Axelle Cheney, who coordinates the international projects within Professor Kosch’s chair. Cheney (a French native) has spent a long time working as a policy adviser to the European Commission in Brussels, speaks four languages fluently, and knows a great deal about international topics and diverse teams.

It all began with a Franco-German study partnership

IRIXYS began with a Franco-German study partnership. After completing his undergraduate degree at TU Munich in 1990, Harald Kosch initially transferred to Claude Bernard University in Lyon, before obtaining a doctorate from ENS Lyon in 1997. His doctoral supervisor was Lionel Brunie, now a professor of computer science at INSA. The two became friends, remained in contact, and developed their friendship into a research collaboration. “It is thanks to serendipity that things worked out the way they did,” Kosch says. “If we had gone into the world of business, IRIXYS never would have been created. The fact that we are both working at universities is what gave us this opportunity in the first place.”

IRIXYS, a member of the European Alliance on Artificial Intelligence, has now become a key player in data science and digital intelligence systems, cooperating with major institutions and leading companies in Bavaria, Germany, France, and all over the world, such as Siemens, Atos and ZF Friedrichshafen AG.

This exchange between science, politics, and business really works, as evidenced by real-world examples where this research has already been implemented. For example, Professor Kosch’s team has been examining how machine-learning methods can be used to detect fraud in bank transfers. Atos, a leading digital services provider, has used this research to develop solutions for its customers. Passau University PhD student Mathieu Garchéry and his Atos colleagues recently presented the main trends of this approach at the summer school in Passau.

There was a need for concrete exchanges on digital innovations among business, research, and politics.

Axelle Cheney, Coordinator at the Chair of Distributed Information Systems

Another example is the ProKimedO telemedicine project, which sought to ensure comprehensive healthcare provision for children and young people in eastern Bavaria—a rural region suffering from a shortage of doctors. Researchers worked together with the Dritter Orden children’s hospital in Passau and other practitioners to develop a knowledge database for pediatric professionals. Doctoral students were actively involved throughout the project.

The IRIXYS collaboration forges links between academia, industry, and governance, extending its benefits far beyond the workroom. IRIXYS provides talented young researchers with an opportunity to explore the practical applications of their research. Companies have access to the best minds in the field from three different countries. And public authorities can draw directly on partners’ knowledge and expertise, which is gained in the development and implementation of this research, to inform their public-policy decisions. In Kosch’s view, joint action and cross-border exchange are the best ways to promote creative solutions for AI and digitalization. “I am convinced that working together is the only path to success. The conditions and knowledge are in place; we simply have to use them—and we are.”